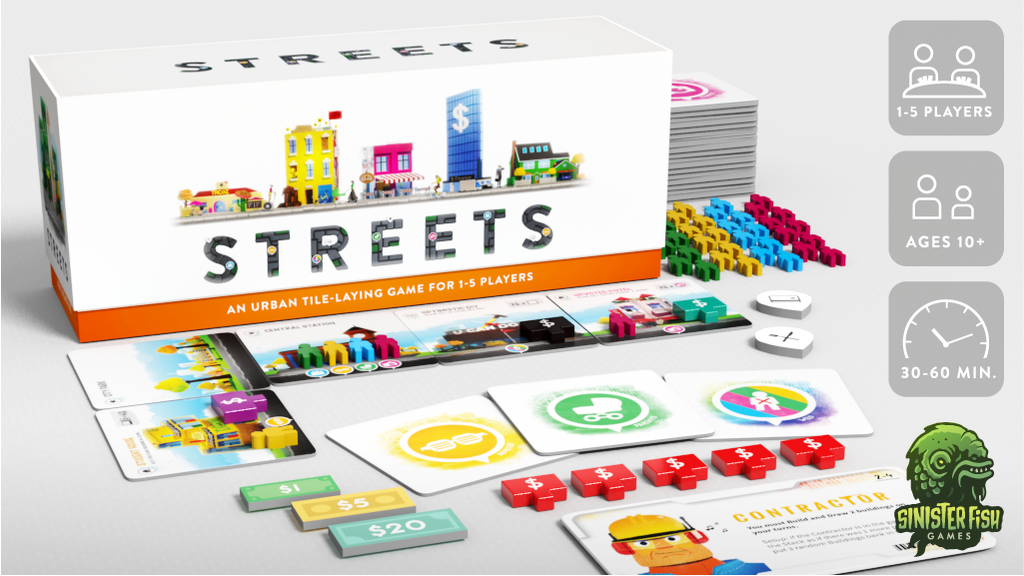 If I back for $1, will I have access to the pledge manager?

Can I pledge for extra copies of the game?

If you want 2 or more copies, you can add funds to your pledge at the same price as the first: £23 for the standard edition, or £38 for the deluxe. In the pledge manager, the extra money will show as credit which you can use to select the relevant additional item. There are no bulk discounts, but shipping will work out a bit cheaper per item.

Or if you don’t want to commit the funds now, you can just wait and add extra copies in the pledge manager after the Kickstarter campaign ends.

Will the rules be translated to other languages?

We are aiming to license Streets to other publishers to release in various languages, in the same way we did with Villagers. We’ll share more information about this as soon as possible, although it may be after the campaign ends.

We welcome translations from fans of the game into other languages - these can be posted on BoardGameGeek, but we suggest waiting until the rulebook is finalised before starting work on them.

Are you doing group pledges?

Sorry, but no. We had one go badly wrong on Villagers and have decided not to risk it again. We encourage group buyers to approach their local games store and try to arrange a pledge through them. Retailers can sign up here to receive information which we’ll release in the coming days: https://mailchi.mp/sinisterfish/sinister-fish-games-retailers

Please note that retail pledges are only open to physical stores.

Are you doing retail pledges?

Yes! We’re making Streets available to retailers with physical stores. This will be the only way for retailers to obtain the deluxe edition and Kickstarter promo pack, neither of which will enter distribution. Streets standard edition will be available from most hobby games distributors upon release.

We’ll send out more information via the list in the coming days.

Will the wooden Coin Chest for Villagers be available on this campaign?

We’re afraid not. This is the most complicated campaign we’ve done so far, and we want to keep production and shipping as simple as possible to reduce the chance of things going wrong.

However, we are aiming to run a Kickstarter campaign for some new wooden coin sets early next year, and we will make the Coin Chest available again then.

Will the wooden money tokens for Streets be available separately?

Not on this campaign, sorry. This is the most complicated campaign we’ve done so far, and we want to keep production and shipping as simple as possible to reduce the chance of things going wrong.

However, we are aiming to run a Kickstarter campaign for some new wooden coin sets early next year, and we will make the Streets wooden money tokens available again then.

Will the Villagers Kickstarter Expansion be available on its own in the pledge manager?

No. We’re trying to keep shipping as simple as we can, so expansions will be shipped inside the Villagers game box, as they were for Kickstarter backers.

However, it is on general release, and you can probably find a copy online or at your local games store.

In the UK and Europe: https://boardgameprices.co.uk/item/show/30176/villagers-kickstarter-expansion-pack

We also have them on the Sinister Fish Games store, but international shipping is expensive for us right now.

What version of Villagers are you offering?

It’s equivalent to the Lumberjack pledge level from the Villagers Kickstarter campaign. So it contains the base game and the Kickstarter Expansion Pack: everything except the wooden coins.

I have a question about the rules.

By all means ask in the comments and someone, maybe Haakon, the game designer, will answer. But it’s more helpful if you ask on the Streets rules forum on BoardGameGeek - then the answer is visible to the whole community forever!

You can find the BGG Streets rules forum here: https://boardgamegeek.com/boardgame/279720/streets/forums/66

Will the Villagers playmat be available on this campaign?

Not this time, sorry!

If & when we do an expansion for Villagers, we’ll make the playmat available then.

What will the retail price of Streets be?

Our recommended retail price for Streets standard edition is £26, about US$34.

The deluxe edition may be sold by retailers who back this campaign, and our suggested price is £48, or about US$60.

Kickstarter backers also recieve a free promo pack which will retail direct from Sinister Fish exclusively for £8-10 or $10-13 depending on final contents.

BackerKit is a service that crowdfunded project creators use to keep track of hundreds to tens of thousands of backers—from shipping details, pledge levels, preferences and quantities, whether they have paid or had their card declined, special notes, and everything in between!

The BackerKit software and support team is independent from the campaign’s project team—BackerKit does not handle the actual reward shipping. For more information about the preparation or delivery status of your rewards, please check the project's updates page.

How does BackerKit work?

After the campaign ends, the project creator will send you an email with a unique link to your survey. You can check out a walkthrough of the process here.

I never received my invitation. How do I complete the survey?

The most common reasons for not receiving a survey email is that you may be checking an email inbox different from the email address you used to sign up with Kickstarter, Indiegogo or Tilt Pro account, or it may be caught in your spam filter.

Confirm that the email address you are searching matches the email address tied to your Kickstarter, Indiegogo, or Tilt Pro account. If that doesn’t work, then try checking your spam, junk or promotions folders. You can also search for "backerkit” in your inbox.

To resend the survey to yourself, visit the project page and input the email address associated with your Kickstarter, Indiegogo or Tilt Pro account.

How do I update my shipping address?

When will my order be shipped, charged or locked?

That is handled directly by the project creator. BackerKit functions independently of the project itself, so we do not have control of their physical shipping timeline. If you want to check on the project’s status, we recommend reading over the project's updates page.

I completed the survey, but haven't received my rewards yet. When will they arrive?

As BackerKit does not actually handle any rewards or shipping, the best way to stay updated on the shipping timeline would be to check out the project's updates page.